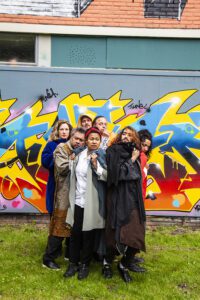 ZID Theater presents Best of Explorez: in the first part of the programme actors, dancers and musicians give short previews of performances that can be seen at various locations in the city during the festival.

ZID Theater’s Alphabet of Uncertain Times, directed by Karolina Spaić, will premiere during the second part of the programme. Eight performers use physical play and poetic images to create a dictionary in which language, image and movement merge. The public experiences how the actors reflect on collective and personal perception in times of instability. Poet Vivian Deekman wrote new work especially for this performance and will perform it.

The Alphabet of uncertain times can also be seen on Friday 8 October in the Vondelkerk.

Discount with CJP, Amsterdam city pass and postcode Amsterdam-West: 1050 to 1069. The passe-partout of €25.00 gives access to all performances of the ExploreZ Festival