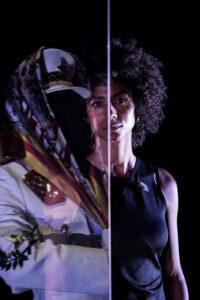 The dance-solo NAM – Non-Aligned Movement is an artistic search for the black European identity and a research of codes of the black body. Both, the choreographer Christian Guerematchi and the musician Shishani, have roots in Europe and Africa. They take inspiration from their own backgrounds and the movements and sounds from the African diaspora. In NAM – Non-Aligned Movement they embark on an epic and Afro-futuristic journey to the Balkans.

Christian Guerematchi is born in Maribor, Slovenia, then Yugoslavia. As a dancer, he worked with companies like Ballet Kiel (Germany) and Compagnie Thor (Brussels) and since 2008 he is associated with ICK Amsterdam. Because of his interest in the voice he works in Amsterdam with choreographers like Nicole Beutler. The performance White Noise in collaboration with the spoken word artist OTION has been Christian’s first bigger and self-produced project.

The performance had the opening night at Theater De Meervaart on 11 September.