Once again, we want to thank everyone so much for participating and collaborating in ExploreZ 2018. We are looking forward to the next edition!

From 22-30 September 2018, ZID Theater – City Art & Performance Centre in Amsterdam organised the fourth edition of the Explorez Festival, with ‘the New Freedom’ as its theme.

Over the 8 days of the festival, 7 original festival productions and programmes were presented on 11 locations in Amsterdam and The Hague. In addition, the production Great Citires under the Moon by Danish ODIN Teatret was performed at the Meervaart. This performance was introduced by ODIN’s founder and director Eugenio Barba.
Conferences, performances, concerts, open stages: all of these were also elements of the festival! ZID Theater itself was present with its new production Lost City.
In all, we welcomed 3720 visitors!

The Explorez Festival is about sharing, looking, experiencing, debating, and creating. It is a multidisciplinary festival that links art and social impact, both at the local and international level. The idea of the Explorez Festival is to create a platform for exploring the relationship between (performing) arts and their social impact, within an international context.

For Explorez 2018 ZID joined forces with cultural and social partners from Amsterdam and The Hague: the Conservatorium of Amsterdam, Podium Mozaïek, Ru Paré, Theater de Meervaart, the Public Library of Amsterdam, Pakhuis de Zwijger, the Van Eesteren Museum, the Rembrandt Park Festival, Food Garden IJplein, Theaterstraat Noord and the Laaktheater in the Hague.

The ExploreZ festival is part of the large-scale EU project Caravan Next, a network of 14 countries in which the Netherlands are represented by ZID. The project is financially supported by Creative Europe. Over the past four years there have been three editions in Amsterdam and one in Belgrade, Serbia. 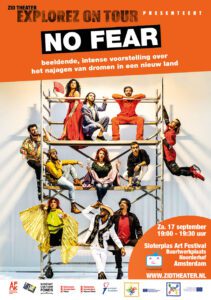